Hi everyone
This one is a time warpy thing and we are heading way down south to the "The Great Ocean Road"
It was another one on our Bucket List that we were able to strike off.
I am taking you back to the year 2002
Which is when we made a round trip from the Central Coast of NSW, through Western NSW, North-East SA, down to the South and across to Victoria, then back through the Snowys and home - in 2 weeks.  Go, go, go.  Don't remember exact details now
The Great Ocean Road is a 243-kilometre (151 mi) stretch of road along the south-eastern coast of Australia between the Victorian cities of Torquay and Warrnambool. The road was built by returned soldiers between 1919 and 1932, and is the world's largest war memorial; dedicated to casualties of World War I. It is an important tourist attraction in the region, which winds through varying terrain alongside the coast, and provides access to several prominent landmarks; including the nationally significant Twelve Apostles limestone stack formations - courtesy of Wikipedia link

Now unfortunately we did this road in reverse - transversing from South Australia through Victoria to Melbourne, which meant that all the fantastic views through your windscreen were unluckily in our rear-vision mirror!!!  But we did make a few stops 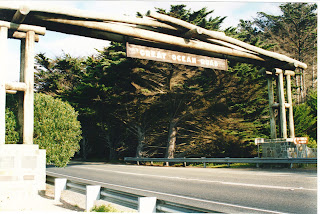 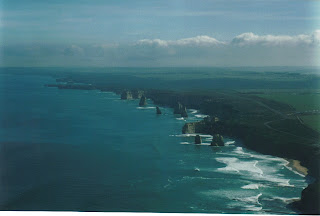 The Twelve Apostles
which by the time we visited were down to about eight or nine
But the title stays ☺
As more are getting created by the ocean and wind
View is from a helicopter flight
And those clouds you see cut short the trip as it closed in very quickly
And you do know the nursery rhyme - London Bridge???
Well down here, part of it did fall down
and now it is called London Arch ☺ 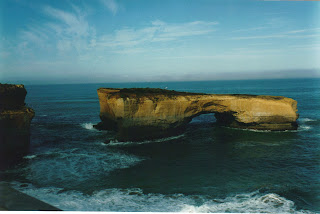 You can see a photo of "London Bridge before 1990" here.http://en.wikipedia.org/wiki/London_arch
The arch closest to the shoreline collapsed unexpectedly on 15 January 1990, leaving two tourists stranded on the outer part: they were rescued by a helicopter. Fortunately nobody was injured in the event. Prior to the collapse, the arch was known as London Bridge because of its similarity to its namesake
These photos were taken by an SLR Camera
Which is still in my possesssion
Though unused
Digitals are so much cheaper than printing ALL the photos I now take ☺
Does anyone else have a "Bucket List" or a "One-Day List".
If so I would love to hear about some of them
Posted by Aussie Maria at 12:00