Firstly thank you to all for the kind thoughts with the coming funeral, which is tomorrow.


Secondly, I won another blog give-away before Christmas and I did not get the chance to say thank you or show my lovely gift.  It was from another Maria's blog, Cats, Crafts & Penguins.  The name caught my attention initially and then when I found out her name was Maria!!!   Well, I had to read further

Thank you so much Maria for the very lovely cosmetic purse and gorgeous card that came with it.  I received it  on 23rd December, but I could not wait 2 days to open it.  So I opened it then and there.  How pretty is it!!!! 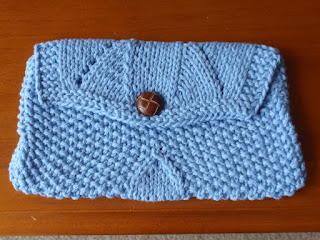 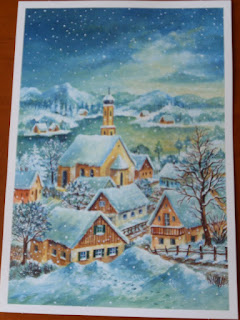 Thirdly, the following came through Knit4Charities group and while I had a laugh I thought others might too.  Enjoy!!!

Do those crochet terms and abbreviations have you stumped? Read on...

Pattern: A set of written instructions that may or may not result in creating the object in the picture. Most patterns include a list of supplies, but this is for your amusement only. After all, Amazonian Rhesus yarn in smoky turquoise does not exist, and cannot be obtained. Patterns also have fun-to-do math problems, such as 1 dc in next 7 dc (34 dc made)?!

Yo: Yarn Over, meaning you need to wrap your yarn over your hook. Of course, this assumes the yarn doesn't split, fray or tangle. If this happens, yo then stands for, "Yell Outrageously."

Dtrtrc: Double-treble- treble-crochet. This is a stitch where you yo four zillion times, insert hook in stitch and pull through the next two loops, repeating until all loops are off the hook, or until the end of time, whichever comes first.

Reverse sc: This stitch is the lefty's revenge on all of us righties - for once we have to work backwards, too! (This has got to be for Garden Bell)

Catalog: A dangerous device that hypnotizes crocheters. It lulls them into a catatonic state, causing them to spend the family's grocery money on patterns and yarn. It may also be an evil plot to cause the downfall of the American economy.

Hook: A device permanently attached to a crocheter's hand. It is also connected to her blood supply, and if for some reason it becomes dislodged from her hand, she breaks into a sweat and starts to feel faint. If the hook cannot be immediately replaced, the only valid substitute is a catalog (see above).

Yarn: The only reason sheep farms still exist! It's also what crocheters buy when they have money; if there's any cash left over, they buy food and clothes.

Doily: This seemingly innocent item looks like a table protector, but if someone actually tries to put a wet glass or an ashtray on it, the creator will instantly turn into a snarling Doberman. Use doilies at your own peril.

Dog: Another non-mechanical device that is used for chasing down balls of yarn and putting tooth-mark engravings in wooden hooks. It's a high-maintenance item that does not store easily.
Baby: A valid excuse to crochet something.

Housework: An ancient rite that was performed by some B.C. women (Before Crochet). Historians believe it may have had something to do with a device called a "vacuum cleaner," which was kept in closets now occupied by yarn."