No crochet or knitting but Pixie's

Hi everyone
The weather has been so hot and humid over the last 5 days or so and very little crochet or knitting has been going on.  My hands are just too clammy.  So no updates on that front, cause I am not sure you would notice the difference.
South Australia is on a 'Red Warning' (or something like that) because of their heat wave. This means weather similiar to those in Victoria earlier this year where so many people, families, homes and neighbourhoods were so severely affected.  Let's hope that is not the case now.
So I will talk about an old book I have had from a young child.  Well the book was given to my sisters and me, but I am the reader, so somehow it has always been with me.
The book was given to me by "Aunt Ruby", who I believe was my grandmothers cousin.  Now I also know that someone was a house-cleaner for the author, Pixie O'Harris, not sure if it was Ruby or my Nan, Thelma.  I know that my Nan was forced very early into employment as a house-cleaner when her Dad died (her Dad died when she was 13 in 1930 and her Mum when she was 16 in 1933).  But I think in this case it is more likely to be Ruby because of the inscription in the book.
The Inscription reads
"For Ruby
a Xmas Gift in advance
with love
Pixie O'Harris
26 April 1960" 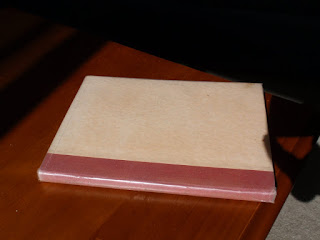 .
Here is the cover of the book with my shadow on the right.  I am not sure if a dustjacket was ever released with the book, but on prowling around web-sites, the few that are available are described similiarly to this.  So I believe no dustjacket. 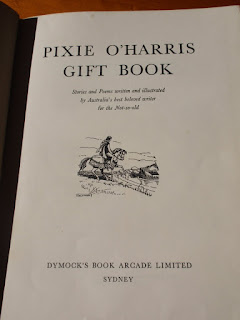 So now you know the author - Pixie O'Harris.  A Welsh born Australian.  You can read more about her here. 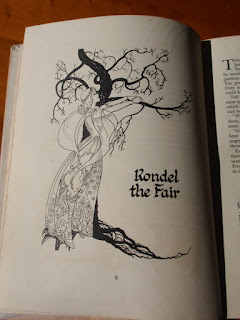 One of my favourite stories is 'Rondel the Fair'.  I used to get so lost in the fantasy that I would forget everything and anything.  Love the drawings and the stories.  My escape valve!!
I believe the book was published in 1950. 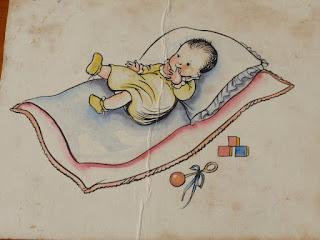 My Aunt Ruby also gave this to us.  Also another Pixie O'Harris drawing, but with colour.  It is a real pity that someone bent the board.  But it has been like that for as long as I can remember it.  Used to always think it was of me.  So I am not sure when Pixie drew it.  I am guessing when she did "The Story of our Baby" which was published in 1940.
I am also lucky enough to have a copy of a photo of my Nan and Ruby taken in 1935
Thelma GAY & Ruby GAY
Bye for now
Posted by Aussie Maria at 09:37 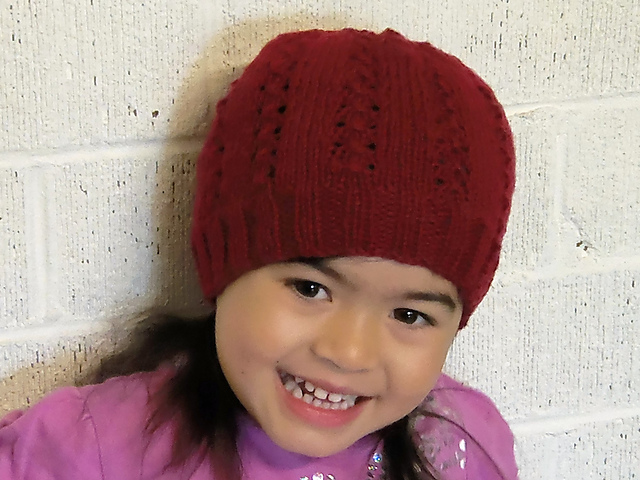